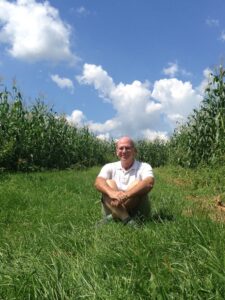 The American Maze Company led by Don Frantz, about it pioneered bringing the art of the maze to America and to the cornfield. In 1993 we created and produced the first ever cornfield maze for private and public entertainment at Lebanon Valley College in Annville, Pennsylvania. Until 1993 the maze was seen as a mostly passive art form. The largest maze was constructed in order to fit in the back lawn of an English manor. In the new American interpretation, The Amazing Maize Maze® has been recognized and imitated throughout the World as a new and unique family entertainment alternative for the summer and harvest seasons.

Each living labyrinth is unique and stretches over acres, with an actual course length of over two miles, and features larger-than-life designs. Some of these themes have included a railroad train, a classic riverboat, a violin, the solar system, a farmscape, the largest living sundial, even the re-creation of George Washington Crossing the Delaware.

The Amazing Maize Maze was first produced in 1993, the brainchild of Don Frantz, Creative Director of the American Maze Company, (and also founder of Town Square Production &, Walkin’Broadway) who has done everything from Superbowl Half-Time Shows to the World’s Fair to Broadway, including his role as Associate Producer on Disney’s theatrical productions of Beauty and the Beast and The Lion King. Now Don has worked his magic on the maze, which has received national attention from USA Today, People, The New York Times, National Geographic, “Good Morning America” and “The Today Show.”

The American Maze Company is in the business of building and assisting others to build mazes based on our proven show, the Amazing Maize Maze. We have specialized in large-scale projects, which are fully produced with music, props, cast, and our own unique copyrighted Gameboard so that the Amazing Maize Maze is not only a maze, but also a theatrical experience. For those in the corporate world looking for a “retreat” location, the Amazing Maize Maze helps develop team building and problem solving skills, and in a natural environment that relieves—as opposed to creating—stress; for kids, it’s more fun than a 3-D computer game, is healthier, and promotes the value of agriculture; for seniors, it might be the joy of a nature walk, and teachers find it a unique venue to augment classroom lessons and curriculum. And the journey throught the maze is anything but passive walking, as it includes music, a gameboard, mailboxes, bridges, a Maze Master, guest orientation, and interactive audience activities.

Since its inception in 1993, tens of millions of people have gotten lost in Amazing Maize Mazes in the United States and England. The company’s first three cornfield mazes made it into the Guinness Book of World Records, and the concept has since been widely imitated throughout the North and South America, Europe, Asia, Australia and Africa. It has become a family tradition for three generations.  Proudly we watched as it saved countless family farms, funded non-profit historical farms by igniting the agritourism industry.

This is where it all started.

Entertainment Producer Don Frantz’ crazy idea and the folks of Central Pennsylvania… helping the Mid-west folks that were devastated in the 1993 farm floods.

“If you build it, they will come”
“Cornelius, The Cobasaurus,” Annville, PA and The Amazing Maize Maze® was born.

Awarded the World’s Largest Maze ever constructed by Guinness Book of Records.

This is where another of Don’s Visions… met Reality.

Thank you! to the “LVC Gang,” who believed and Made it Happen!

Get your copy of the very first cornfield maze: Cornelius.pdf

Read more about the first ever Amazing Maize Maze HERE.

Where Will it End?